Click on small images to see full-size versions. The full size versions may appear oversize for viewing on screen easily, but should be legible if printed out on a printer of at least 300 dpi.

The brochures included here cover the early models of the West Wight Potter manufactured by HMS Marine in Inglewood, California. All were fiberglass and gunter-rigged with wooden spars and were marketed as 14 footers.

Was this the first U.S. built Potter? The sail numbers appearing on the photos on the front of the HMS Marine brochures appear to mark the beginning of the series described in the brochure, suggesting the first U.S.-built Potter was numbered "151." (However, there has been a report of a #145 for sale in Middlesex, New York, which may or may not be a U.S.-built Potter.)

Gunter-Rigged Potter 14 No. 300
A more refined version that includes a sliding hatch 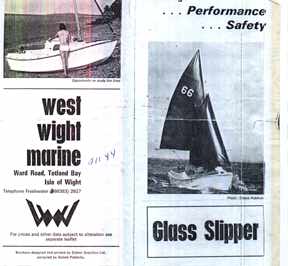 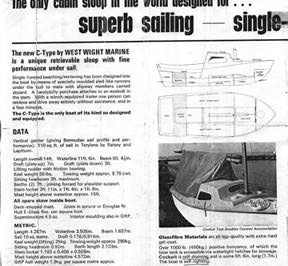 This brochure is interesting because the boat is described as a C Type and it appears similar to the C Type Potter in the brochure above, also built on the Isle of Wight. (In fact, it uses the same photo of #66.) However, this C Type is called a "Glass Slipper," not a "Potter." The brochure uses the "WW" logo like the one Stanley Smith used for his West Wight Plycraft Potter and which was used by HMS Marine for Herb Stewart's gunter-rigged Potters except the logo does not include the "P" for "Potter." The sail emblem is a slipper instead of the WWP logo. (The original "WWP" logo is shown at the top of this page.) Nowhere in the brochure does the name "Potter" appear. This brochure was sent to me by Steve Oliveira, who owns Glass Slipper Mydaoff #79.

For photos of another C-Type ("Glass Slipper" or "Potter"?) see Derek Treuer's Frodo.

The following are articles rather than brochures. The first was reproduced in The Potter Yachter, but I don't know its origin. The article does not refer to the boat as a D Type, but that is suggested by the sail emblem. The article mentions that the boat has a "C-Type cabin." The second article is from the Dinghy Cruising Association in the UK and was contributed by Tom Grimes. The author describes his D-type Potter, identified as a "Ghia" version. 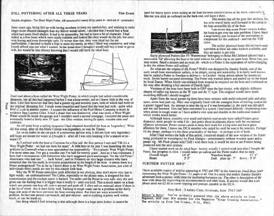 The following clipping from an old Potter Yachter shows the junk-rigged D-type option. 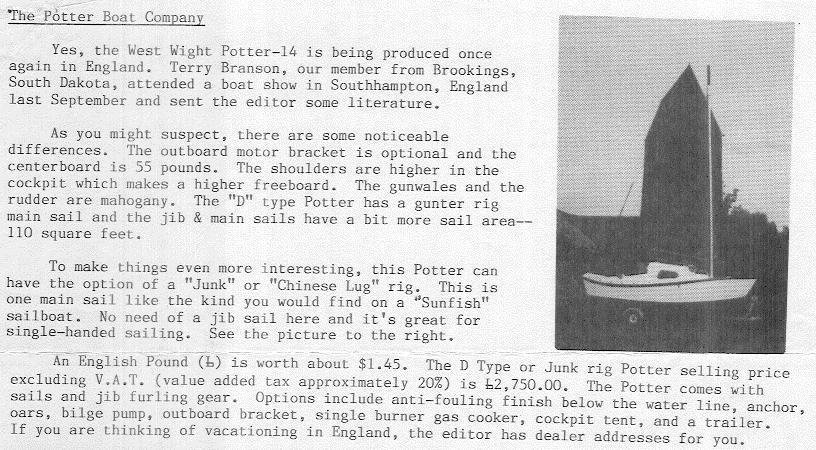 A wooden Potter appeared again in the early nineties with the design and production of the Potter AX by Martin Pook.It is no longer in production. Photos of the Potter AX may be seen on the WWP web page at http://community.fortunecity.com/marina/westindia/515/photos/British/British_potter.htm The following is a copy of a 1995 (or earlier) display ad for the Potter AX. The ad appeared in the UK publication, The Boatman. (Click on this image to see larger version.)

Not actually a Potter, the 12-ft Sparrow was also built and sold by HMS Marine, the Potter manufacturer. The following HMS Marine flyer for the Sparrow credits Herb Stewart as the designer. Herb created the U.S. version of the Potter 14 and designed the HMS-18 (Potter 19). The Sparrow had a shoal draft fixed keel. The Sparrow was 2 feet shorter overall than the P-14 but was only a few inches shorter at the waterline. Also note that the jib is larger than the mainsail

The Sparrow was later manufactured by Sparrow Yachts in Washington. Addiltional photos of a Sparrow